Thank you for your purchase of our Audiobook!

This page includes chapter endnotes and illustrations that are not easily included in an audio format. We will include book text as well as the source information for each endnote. If you have additional questions, feel free to email us at info@christianfamilylife.com.

Nearly 70 percent of the population believe it’s important for men and women to be married if they plan to spend their lives together [1] and more than 2.1 million couples said “I do” in 2016.[2]But marriage as an institution faces serious challenges. More than 800,000 divorces were recorded that same year and, as the population grows, the percentage of couples marrying is not keeping pace.[3]

Children are immediately impacted by these developments. In 1964 only 7 percent of children were born out of wedlock.[4] Four in ten are now born outside of marriage[5] and by age twelve will have spent at least some of their lives in a “cohabiting household,” usually with their biological mother and her partner. These families are more likely to be impoverished, have less formal education, and be less stable.[6] Adolescents living in these homes are more likely to engage in risky behavior, including sexual promiscuity, struggle with substance abuse, and underachieve in school.[7]

The median length of a marriage that ends in divorce is eight years. [8]
Among struggling couples experiencing significant pain, 80 percent want the best for their spouse. [9]

The Cycle of Unmet Expectations 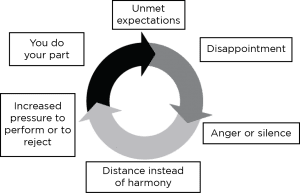 Statistics prove the opposite. Couples often experience “relationship inertia” and slide into matrimony because it’s harder to end a relationship when living with their partner. [10]
More than 50 percent of highly happy couples agree with the statement, “God is at the center or our relationship,” while only 7 percent of unhappy couples can say the same. [11] 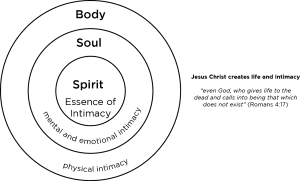 Step One: God creates a need in our lives.

Step Three: God created the provision for our need.

If you were formerly divorced or not a Christian when you married, or perhaps unsure you’re married to the right person, the principle of oneness still works.[12]

[12] Physical, mental, or other abusive behavior—coercion or threats by one spouse to control or intimidate the other—is never a part of oneness. Seek professional help in this situation.

Miraculously, he did honor the obligations. Among other lessons learned, Coach Gibbs never makes a major financial decision without listening to Pat’s guidance.[14]

[13] Timothy J. Keller, The Meaning of Marriage: Facing the Complexities of Commitment with the Wisdom of God (New York: Dutton, 2011), 40.

The Cycles of Insults and Blessings

It takes tremendous spiritual perspective to submit as Christ did, yet God requires it from wives. [16]

[16] As we mentioned earlier, abuse—physical, sexual, verbal, etc.—is never permissible in a Christian marriage. Promptly seek professional help if this is your situation.

Gender difference is one. Numerous studies show that girls mature more rapidly than boys, becoming verbal at an earlier age. [17] As adults, men are inclined to talk more in larger group settings, while women talk more when collaborating with others around a task.[18]

Studies show that we talk a lot, about 16,000 words per day.[19] Depending on our age, we send twenty to sixty text messages daily.[20] Nearly every mobile phone user texts from the device and nine out of ten email from it as well.[21]

In marriage, emotional intelligence describes the ability to identify your emotions, and those of your spouse, as well as having the skill to cheer up or calm down the other person.[22]

Differences in communication styles and resolving conflict are two of the most common reasons husbands and wives divorce.[23]

Even when they were talking about pleasant or mundane facets of their relationships, they were prepared to attack or be attacked.”[24]

They missed nearly 50 percent of the positive things their partners did.[25]

Perhaps people sensed this contemporary tragedy and somehow were helped by a simple choice I considered the only option.”[26]

Develop a plan to gradually refocus your job. Pursue what you enjoy and do well.[27]

[26] Robertson McQuilken, “Living by Vows,” Christianity Today, February 1, 2004, http://www.christianitytoday.com/ct/2004/februaryweb-only/2-9-11.0.html?start=1.
[27] James 1:2-7: “Consider it pure joy, my brothers and sisters, whenever you face trials of many kinds, because you know that the testing of your faith produces perseverance. Let perseverance finish its work so that you may be mature and complete, not lacking anything. If any of you lacks wisdom, you should ask God, who gives generously to all without finding fault, and it will be given to you. But when you ask, you must believe and not doubt, because the one who doubts is like a wave of the sea, blown and tossed by the wind. That person should not expect to receive anything from the Lord.”

One recent study projected these women would earn an annual salary higher than $115,000 with a ninety-four-hour work week.[28]

Another report placed the number over the $65 thousand dollars annually.[29]

If this describes you, there are many good books available that will deepen your understanding of sexuality.[30]

To determine what is permissible in marital sex, there are, according to Linda and Lorraine, three key questions for you and your spouse to consider:[31]

[30] For further information about this topic, we recommend chapters 2 and 3 of The Act of Marriage by Tim and Beverly LaHaye, because they communicate the wholeness of the individual man and woman.
[31] Linda Dillow and Lorraine Pintus, Intimate Issues (Colorado Spring: WaterBrook, 2009), 201-206.

This is the 6th edition of Two Becoming One, first published as Becoming One almost 40 years ago. We remain utterly humbled that the Lord has allowed these faith principles for relationships to impact hundreds of thousands of readers, small group members and seminar attendees.

We are deeply grateful to our original team at Christian Family Life—Barry and Mary Leventhal, Ney Bailey, Tim Timmons, Jody and Linda Dillow, Waylon Ward and others. Dennis and Barbara Rainey and the team at FamilyLife Ministry have turned these principles into a virtual movement with the excellent Weekend to Remember seminars.

We are blessed by our many faithful supporters who with their prayers and financial contributions have sustained Christian Family Life and preserved for future generations the message of faith love. Their dedication and generosity have astounded us.

As Roland and Tammy Martinez take up the mantle of faith love and hands-on leadership of Christian Family Life we hope and pray they, too, will be blessed with such enthusiastic support.

The authors wish to thank Chuck Merritt of White Post Media for his writing, editing and project management of this edition of Two Becoming One. We also wish to thank Ginger Kolbaba for her editorial guidance and writing contributions, Elizabeth Lessert for the interior layout design, Darren Welch of Darren Welch Design for the cover, and Brett Olsen for his voice talent in recording this audiobook.

Don and Sally Meredith founded Christian Family Life in 1971 and have made it their life-calling to share the faith love principles. Both held significant leadership and teaching positions with Cru (formerly Campus Crusade for Christ) where they began to share these faith principles with couples worldwide. They have lead many church plants where Don has served as a teaching elder and were instrumental in helping develop the Fellowship Church model, launching Fellowship Bible Church in Little Rock, among others. Sally is the author of Ruth: The Story is in the Names and most recently, Overcoming Woundedness: Lessons from the Life of Joseph. Don and Joe Gibbs founded Joe Gibbs Racing and labored together nurturing the team into a championship NASCAR powerhouse. The Merediths have celebrated 50 years of marriage, have four adult children, 11 grandchildren and reside in Charlotte, NC.

Roland and Tammy Martinez have dedicated themselves to teaching and discipling others.  Initially serving in Christian education and pastoral ministry together in Miami and Ft. Myers, Florida. Eventually moving to Charlotte, Roland served as a full-time pastor where he and Tammy counseled couples and helped them to build God-honoring faith relationships. After pioneering the ministry of Christian Family Life in Caribbean and Latin American countries, Roland became the president of Christian Family Life in 2013. Roland and Tammy are frequently asked to teach church leadership the faith principles and share their application in seminars with couples. They have six children ranging in age from elementary school to college graduates and are active parents, residing in Charlotte, NC.